The United Nations Population Fund (UNFPA) in partnership with Reach A Hand Uganda (RAHU) established a powerful, inspiring conversation platform titled, “Live Your Dream Moment.”  The platform is a two-hour dialogue that engages icons to share their personal experiences with different social issues that affect young people in Uganda. The principal goals of this conversational platform are to empower young people to overcome everyday challenges, and to encourage them to pursue their dreams.

The Live Your Dream Moment platform is a component of UNFPA’s larger “Live Your Dream Campaign”, which consists of four pillars that each aim to end gender-based violence, end preventable maternal deaths, end teen pregnancy, and empower young people living in Uganda to live healthy lives. 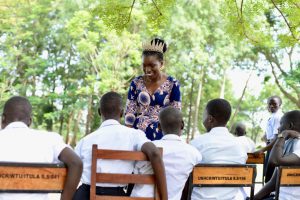 Miss Madi interacts with students. She encouraged them to work hard so as to Live their dreams.

The theme for the 2019 World Refugee Day is #StepWithRefugees, focusing on the importance of taking steps in solidarity with refugees around the world. This Live Your Dream Moment event featured two speakers: Gwolo Julius and Christine Leito.

Gwolo Julius is one of the hundreds of thousands of displaced South Sudanese who were forced to seek shelter in Uganda. Julius lost his father when the war started in South Sudan, and felt as if all hope was lost. After sharing his inspiring tale of resilience, he expressed that, “It is not only the wealthy who can make it and achieve their dreams… I came to Uganda with nothing but I never gave up.” He is now the head teacher of Ebenezer Baptist School. He hopes to attain a PHD in Education. 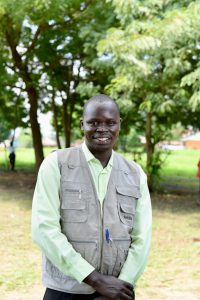 Gwolo Julius, the second speaker. He shared his story of resilience and talked about the importance of dreaming big dreams.

Christine Leito, crowned Miss Madi 2018, has campaigned against sexual gender based violence in the Madi region. Leito recalled that growing up she was repeatedly told that she “would never amount to anything”. Nevertheless, she persisted. Now, she is a champion and advocate of women’s rights in her own community and in surrounding villages.

The event featured several inspiring displays of courage and strength, as the speakers shared intimate stories of survival and strength. Gwolo Julius, in a direct conversation with young people from Sudan, encouraged the refugees to stay focused and embrace the community around them. “I know a lot of you have experienced so much trauma over the past few years. Accept the community where you are now. We have been welcomed. We are making a home here. Just stay focused.”shared Julius.

Miss Madi similarly shared inspiring advice with the young people living in the Settlement. As an advocate for ending teenage pregnancy, Leito focused on the importance of empowering young women and girls to reach their full potential. “It is unfortunate that in the Madi community as long as a girl hits puberty then she is ready for marriage. Parents should stop looking at their daughters as ‘meal tickets’.” She emphasized that “empowering a girl empowers the whole community”.

Share this Story
More Stories
Next Story How We Can Better Menstrual Hygiene Management Among Among Young People In Uganda.