Lemi Steven, 24, is now a resident of Bidibidi settlement in Yumbe District since 2016 when he was forced to flee his country of origin, South Sudan, due to violence and persecution. In his own words, he not only praises but is glad of the Women, Adolescents and Youth  (WAY) program that has opened his eyes to correct information on Sexual Reproductive Health and Rights (SRHR) and Gender Based Violence (GBV) something he didn’t have access to in war torn Sudan. “I left my homeland in Noka village for one main reason: war—which has displaced most of us. I fled to Uganda through West Nile and found shelter in Bidibidi settlement Zone 2 village 8, Yumbe district which I call home up to date,” he narrates. He also mentions how grateful he is for being given a platform to engage his fellow youth to interact and to encourage conversation regarding the role of youth in the community.

Lemi found out about the WAY program through the Settlement Commandant who pinned up a poster in the settlement community. He then applied and was considered a Youth Champion and so he went through the training- “I felt so hopeful about my future because now my life is changed from before when all I did was just sit home and wait for another day to unfold,” he says. 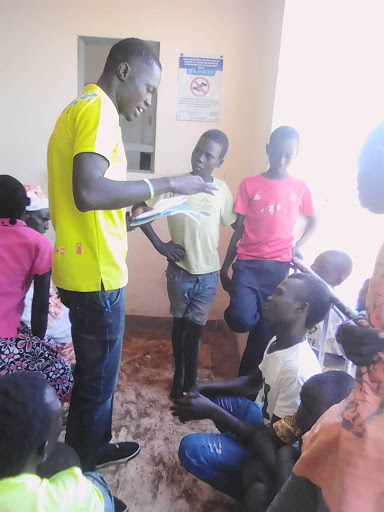 “The community dialogues have given me a chance to have hope and to understand that I am being given knowledge to become a powerful peacemaker and also tackle issues of SRHR and GBV with my fellow peers and the community at large. I feel that I am improving in public speech every day and I’m grateful to Reach A Hand Uganda for believing in me to pursue the WAY program,” Lemi smilingly adds.

Lemi is only one of many young people that have greatly benefited from our WAY programme that is running in the West Nile and Karamoja region. WAY is a programme that supports raise reproductive Health awareness among young people and helps to combat GBV especially in the refugee and host community through over 80 Youth champions who we trained and empowered to support other Young People.

It should be remembered that Uganda currently hosts almost 1.4 million refugees, mainly settled in Acholi, West Nile and the Southwestern regions of Uganda. The Acholi and West Nile regions are dominated by refugees from South Sudan, who also comprise 1 million of the total refugee populace. This means that this is a sensitive region, given the many young people who come into the host community with reproductive health and rights needs that need to be addressed with care and with sustainable measures.

Women, Adolescents, Youth (WAY) and Rights Programme is a five year programme that kicked of in January 2018 by the Government of Uganda under UNFPA’s 8th country programme supported by the Ministry of Foreign Affairs of Denmark/ Danida, targeting both refugees and Ugandans in select refugee hosting districts in Northern Uganda with an aim of enhancing women’s and young people’s access and utilization of quality Sexual Reproductive Health and Rights (SRHR) and Gender Based Violence (GBV) services in refugee and host communities across 8 districts in West Nile and Acholi regions (Adjumani, Agago, Amuru, Arua, Kitgum, Lamwo, Moyo and Yumbe). The programme comes to address the empowerment gap and to advocate for contemporary solutions.